Okay, so you wake up tomorrow morning, not yourself as you know it with two arms, two legs and a head, but instead you’re 700,000 times smaller than the average human, exceptionally hairy, you can fly (bonus feature) and your day job is now to collect pollen. And your new boss is known as “Queen”.

But here’s the kicker, you’ve got FIVE (5) EYES!! Two of them called compound eyes and made up of 6,900 tiny lenses that take up about half your face. Each lens sends you a different “pixel” which you use to see the world around you. Colors you see are different now, red looks like black and your three ‘primary’ colors are blue, green and ultraviolet. Your other three eyes detect only changes in light to tell you quickly if danger is nearby.

Here are some cool Bee FAQs:

All is well with the world, because Beyoncé and Lil’ Kim can both “bee” the sole Queen of their own hive.

Read more about “What Is It Like to Be a Bee?”

As a professional driver, quality sunglasses are a must to do my job safely and efficiently. It doesn’t hurt to look great while doing it too! Vuliwear are my go to shades when others just don’t cut it. Check them out You definitely won’t be disappointed 🙌🏾😎 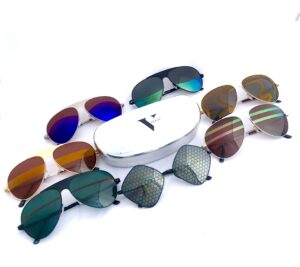